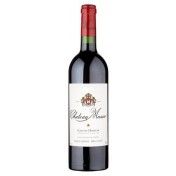 
N.B. Chateau Musar recommend the use of prongs to remove corks that are older than 15 years of age, as using a corkscrew may prove difficult to remove the cork in one piece.

One third each of Cabernet, Cinsault and Grenache, aged for a year in French Nevers oak barrels.
Mid garnet. Pale rim. Paler than the 2006. Light, tea-leaf nose. Sweet start. Dry and powdery finish. Very unformed. I could easily enjoy this with Greek/Lebanese mezze – in fact these flavours strongly remind me of dolmades – but ideally with all these fine tannins I would continue to cellar this vintage. Quite long. 2025-2042. 17.5 points Jancis Robinson MW

2007 was a good year for the Cinsault which displayed red berry and concentrated cherry fruits, reminiscent of Amarone. As the Cabernet Sauvignon rested in vats, it showed intense coffee bean aromas and ripe fruit, typical of a warmer vintage. Nearly 7 years on, upon its’ release in the spring of 2014, the wine is showing impressive aromas of blueberries, ripe blackberries, cherries and plum fruitcake. The palate is initially soft and round with primary fruits of blackberry, plum, red cherries and pomegranate with some chocolaty spicy notes in the background. It opens up with mouth filling berry fruit and delicious notes of concentrated dark fruits and molasses. It really begins to impress in the mid palate where it holds its’ intensity and structure effortlessly all the way to the end. The alcohol is well integrated with elegant but youthful tannins – it is a well-balanced wine with good underpinning acidity and a compelling structure. - Ch. Musar