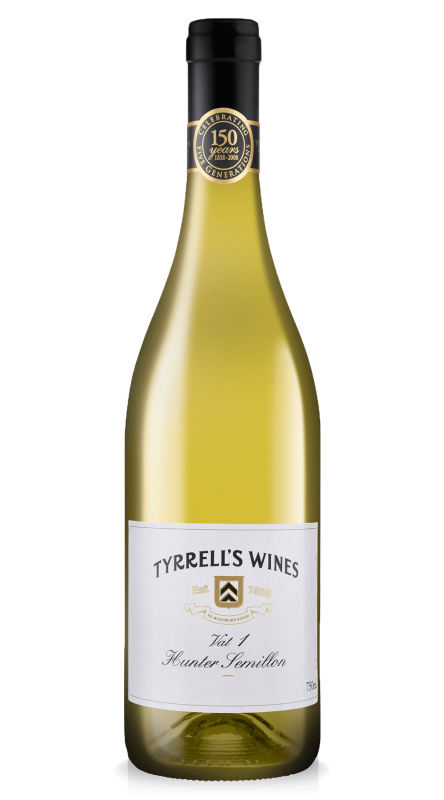 A cull of the most propitious plots across the single dry-grown sites. Additional lees time in the modern era has promoted a winning approachability after a few years, rather than several. And yet Vat 1’s capacity to age is prodigious. Barley water, honeysuckle, lemon drop, dried straw and a skein of evergreen freshness that quenches, drives and balances the myriad of accents and textures. This is a long sheath of nervous energy, readying itself for calm into the later stages of development.
Vat 1 Semillon only ever comes from Tyrrell's best old vine, dry grown vineyards. These blocks feature ideal sandy, free draining soils that give these wines their unique character. The oldest of these blocks was planted in 1923.

The 2016 growing season was one that started with great promise with the wettest winter in nearly a decade. Perfect conditions for budburst and flowering were followed by an unsettled summer consisting of hot days and wild storms. Luckily, these weather patterns calmed down into one of the driest February’s on record. Handpicked in the early hours of the morning, the fruit is very lightly crushed and pressed before a relatively cool fermentation. Then the wine spent minimal time on yeast lees before being bottled early to maintain its freshness. No oak fermentation or maturation.

Tyrrell's Vat 1 Semillon has long been one of our most popular Australian white wines and our allocation sells out every year. The latest release, 2016 is due to arrive in the Autumn. Fans of this benchmark Semillon will want to get in early.

The Tyrrell family have been making wine in Australia's Hunter Valley for 160 years. Their exceptionally age-worthy Semillon, in particular, have gained them world renown. What's more, at around 11.5% they remaining refreshingly elegant. Tyrell's also produce a remarkable Shiraz from some of the oldest vines in Australia. Having been spared phylloxera, the Hunter Valley growers are able to maintain vines on their own rootstocks, rather than grafting to American rootstocks as is the norm.