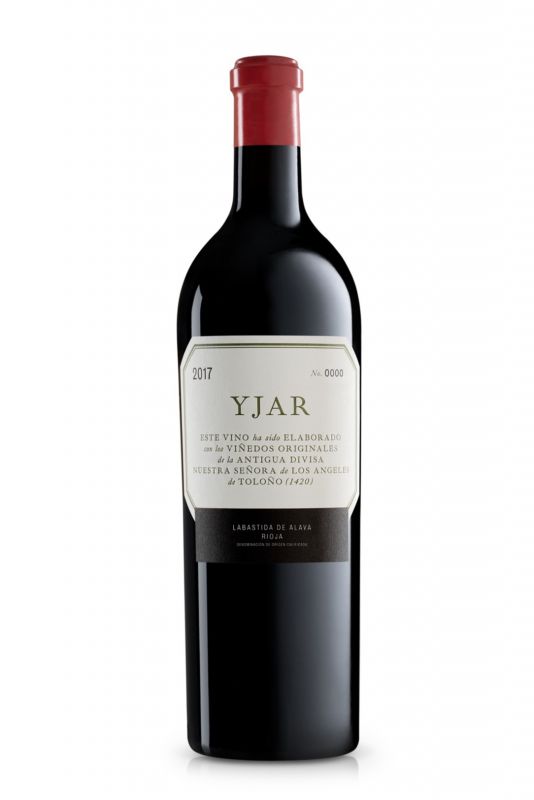 This was a standout wine from my September Releases report, and I was thrilled to confirm its brilliance at a tasting I did with Tim Atkin in London a few weeks ago, looking at the shared history of Rioja and Bordeaux. It's powerful, setting an intention right from the first moment, layered and perfumed with an abundance of liqourice, blueberry, raspberry and redcurrant fruits, offset by gentler rosebud and tobacco. Reticent and generous, with years ahead of it, and although it will benefit from another few years in bottle, you will already understand the bones of this wine if you give it a good few hours in a carafe. Winemaker Telmo Rodriguez. First vintage, and I already can't wait to see what happens next.
2017 Telmo Rodriguez, YJAR, Rioja, 3x750ml

YJAR
597 YEARS LATER, WE DISCOVER THE WINE BELONGING TO THIS HISTORIC ENCLAVE AND VINEYARD.

HISTORY
In 1420, the Hieronymite monks abandoned the sanctuary of Toloño and the farm “Granja Ntra Sra de Herremelluri”. From then on, the “Divisa de Nuestra Señora de los Angeles de Toloño” began to manage both the sanctuary and the farm, as well as several other lands. The “Divisas” were fraternities whose members had common interests. This particular Divisa was mainly composed of the towns of Labastida, San Vicente and Peñacerrada. Its “Divisero Mayor” (executive member) was the Count of Salinas, Duke of Híjar, the largest landowner of the area. For more than five centuries this Divisa became increasingly influential and prosperous; the Spanish war of Independence, the first Carlist war and the secularization of Mendizabal during which many properties were sold put an end to this fraternity. Yet perhaps it was the fire of the Monastery in 1835 which marked the beginning of its decline.

After more than hundred years of abandonment, in the 60’s of the 20th century, a new chapter begins. A Basque family buys the property and for more than 50 years works on giving back the viticultural character to this exceptional enclave.

PLACE
The property is located in the foothills of the Sierra de Toloño, between 600 and 800 meters above sea level. In this triangle between Labastida, San Vicente and Peñacerrada, on calcareous soils, some of the oldest and most incredible vineyards of Rioja Alavesa are found.

More than 200 wine presses carved into the rock dating from the 8th to the 12th century, bear witness to the great viticultural vocation of this territory.


THE VINEYARD
During the 50 years of restoration of the property, nuances and singularities have been appearing and exhibiting a complex and diverse vineyard. Over the last 10 years, with the arrival of the new generation, an in-depth work with more resources and extensive knowhow has made it possible to highlight an exceptional vineyard which combines all the character and talent of a real “Grand Cru”.

This old, goblet trained high-altitude vineyard, co-planted with a massal selection of Tempranillo, Graciano, Garnacha, Granegro and Rojal, is the foundation of this passionate project.

THE SOIL
YJAR are 3.8 hectares, selected after hundreds of analyses, soil pits and studies. Unique, deep, loamy textured soils developed from marls, enriched with abundant colluvial material from the Sierra de Toloño, with a high concentration in carbonates and very stony. Soils are alkaline, without limitation for root growth, perfect for the water feeding of the vineyard in all phases of cultivation. They are taxonomically catalogued as Typic Calcixerepts (USDA) or Haplyc Calcisol (FAO).


THE WINE
YJAR connects us with the incredible effort of mantaining this historical vineyard and the need to offer the “grand vin” of this country. In 1787 in Rioja and Labastida, Manuel Quintano made the first modern wine in Spain. In 1870, Labastida played a major role in the “Medoc Alavés” adventure. Today, 150 years later, YJAR approaches Bordeaux to take the journey together in order to offer the best wine of our history.


THE FAMILY
An original, entrepreneurial family, very connected to culture, has worked in silence for more than 50 years to restore this property, showing interest in its history, and recovering its landscape. During the last 10 years, with the arrival of the second generation arises the ambition to practice the best viticulture and to make one of the greatest wines in the world.

Telmo Rodríguez
Telmo Rodríguez studied oenology in Bordeaux. His mentors, Bruno Prats, Eloi Dürrbach and Gérard Chave, opened his mind to the world of the “Grand Vin”. This inspiring experience was the beginning of a radical approach to Spain’s heritage. Back in Spain, he joined the family estate. At the beginning of the 1990s he moved on and together with Pablo Eguzkiza created Compañía de Vinos Telmo Rodríguez. Since the very beginning, convinced of the great value and potential of the Spanish vineyard, Telmo was a pioneer in recuperating Spain’s authentic terroirs, rediscovering the best wine regions, native grape varieties, and original viticulture. With passion and very profound work, he resuscitated and replanted amazing vineyards, which over time have become benchmarks, like Las Beatas and Tabuérniga in Rioja, or O Diviso and Falcoeira in Valdeorras.